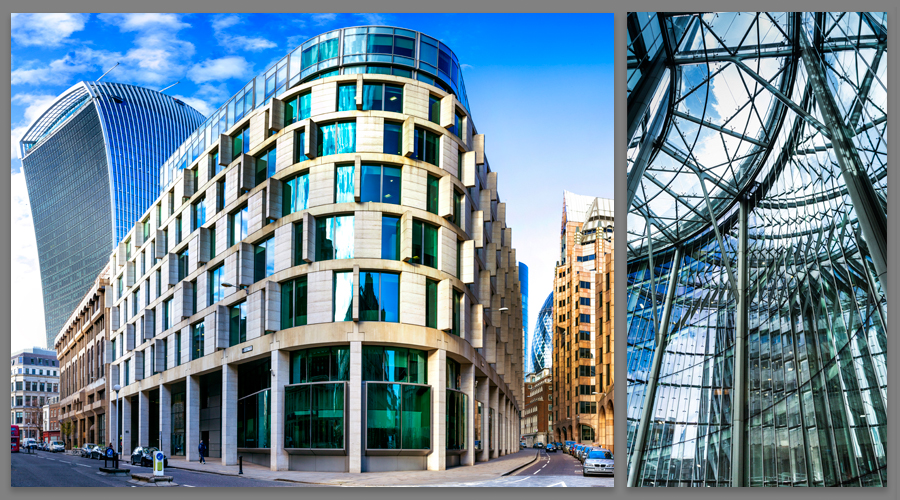 Stunning architectural photography in the heart of the City of London

The heartbeat of the City of London, Fenchurch Street is between Bank and Aldgate stations with Fenchurch Street mainline slap bang in the middle. Weekedays it is a bustling, throning area full of commuters and services going about their business. On weekends it is calm and almost empty of people, which allows an opportunity for Architectural photographers to ply their trade.
City Point in Ropemaker Street built in 1967 still looks modern with the use of glazing and steel.

Fenchurch street a mix of steel and glass.

Because of the height of the buildings left and right, it creates a wind tunnel effect. In summer the complete opposite occurs with a solar glare effect from the large quantity of glass used on the modern buildings. Fenchurch Street stills has a mix of old and new properties standing cheek by jowl. 20 Fenchurch Street overshadows them all, affectionately known as the walkie-talkie building.

You realise the importance of this street when you point your camera towards the architecture. It almost speak out to you. You can imagine in Victorian times it was a busy thoroughfare from Algate to Gracechurch St, Lombard St and Bank. The City has changed many of its featured buildings over the generations, but some still stand in the giant shadows of the new bricks on the block. No where in London has a more striking contrast of old and new.

As a photographer you get to love photographing buidlings, you respect them and observe them. They look different from sunrise to sunset, from January to December. They all have features that reflect the period and it is with wonderment that a London architectural photographer can capture a building at its best. It can often take several visits to see the benefits, but it is then that it can twinkle like a precious stone. I only wish I had been around as the great pioneers of photography worked their way around London carrying large format field cameras, tripod and plates of film. To work amongst the clatter of horses hooves, the sound of the steam trains as they pulled into the station. The yelling of street puveyors selling their wares. Who will buy this wonderful photography?